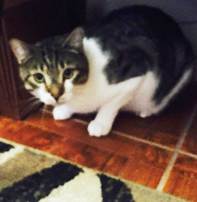 Update March 2, 2017: Tera picked up Mr. Kitty and took him home to her grandparents who have experience with cats. They're excited to have Mr. Kitty in their home, and they think it will work out beautifully!

A year ago, as an orphan, Mr. Kitty went to live with Antoinette. After she passed away, Mr. Kitty was left alone in her home, grieving and scared. Antoinette did not have any family nearby but, fortunately, she had one friend who is going in to the home to feed Mr. Kitty.

Mr. Kitty is a large, 7-year old, fixed, male cat, weighing in at around 15 pounds. He is an indoor cat, used to being the only animal in the home. Due to all of the changes in the past year, Mr. Kitty is very shy.  Antoinette’s friend told us “he is the sweetest and most scared cat” she has ever seen.  She also said that he is very loving and when he is in your arms, he only wants to be held and petted.