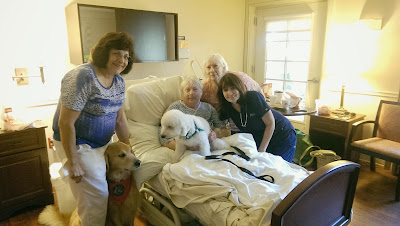 Deborah knew a thing or two about living, loving and dying.

Dogs had been at the center of Deborah’s circle of life for a long, long time.

In the past several years, she lost two of her beloved canine kids. In between losing them, Deborah adopted TJ, now a 3-year-old Bichon Frise male, whom she described as “the best dog I ever had.” TJ became the object of Deborah’s loving spirit, and he reciprocated that affection as her constant “cuddle-bug” from her couch to her hospital bed.

When Deborah’s diagnosis landed her in the hospital and subsequently at Hope Hospice, TJ had to take up residence in a kennel. Although the kennel was top of the line, and TJ got high “good boy” marks from his caregivers there, this was not the life that Deborah wanted for her baby.

Enter Susan Conner and her Golden therapy dog, Gipper. Deborah’s room at Joanne’s House was their last stop on their visitation list in late February. Deborah had never met Susan or Gipper before, but when they walked into the room on this particular Wednesday afternoon, Deborah zeroed in on a potential source of help for TJ.

In her matter-of-fact way, Deborah told Susan, “God has punched my ticket.” She explained that before God arrived to take her home, she must find someone to “go get my puppy from the kennel he’s been in for two weeks.” Deborah was clear that she wanted to find TJ a good home before she could rest in peace. One more thing was on Deborah’s mind: She wanted to see her baby boy again.

Realizing that time was of the essence, Susan pledged her help, then immediately contacted the volunteer coordinator to get help from Hope's Pet Program.

Susan offered to spring TJ from the kennel and foster him while a permanent home could be found. First, she needed all the required authorizations to pick him up from the kennel, his shot records, and permission to have him treated by a veterinarian before she brought TJ into see Deborah or to meet her own pets.

Deborah’s sister, Amy, proved to be a terrific ally in this process. Within 24 hours, all the records were produced and permissions granted. Susan “sprung” a tail-wagging TJ from the kennel on Friday, and after a quick bath on the Conner lanai, he went straight to see Dr. Linda George, medical director at Best Friends Animal Hospital. He checked out well, got his inoculations and preventive medications updated, and was declared healthy and adorable.

Susan says he behaved like a champ through all of these machinations. “Deborah told me he had been through a lot in his three short years, including the death of his best canine pal and Deborah’s illness.” Despite all of the bumps in the road, he remained a sweet, amiable puppy.” His only problem was whimpering borne of insecurity. On the flip side, he proved quite adaptable and sociable around other pets. He blended instantly with the Conner boys, Gipper and Edison, two hulking Golden Retrievers who are both certified therapy dogs and frequent visitors at Hope Hospice. Their acceptance of TJ was a given. TJ had never met a cat before, but Sassy, the Conner’s Ragdoll, and TJ forged a quick truce.

By Saturday morning, the clean and healthy TJ was ready for a reunion with Deborah at Joanne’s House. Susan reported that TJ was a great passenger, but when the car stopped, he was nervously whimpering, as if to ask, “Where to now”? When he arrived at Deborah’s threshold, he made his beeline, bounding onto Deborah’s bed and cuddling on her lap into a state of total relaxation. His expression communicated, “Finally, I am back where I belong.”

Susan, who was present at the reunion, recalls: “It is one of the most moving moments I have ever witnessed. The love between Deborah and TJ was unmistakable. I will never forget that instant when they reconnected.”  The nurse on duty reported that TJ worked wonders for Deborah’s spirits.

In the two weeks that followed, TJ visited Deborah several times week while the search for a permanent home produced several suitors for TJ. After a trip to a professional groomer, who made TJ a bona fide knockout for his second visit with Deborah, interest multiplied. As Susan observed, “This puppy is so cute and so good. To know him is to love him.”

The person who emerged as TJ’s permanent owner was Jackie Mullen, who lives with her husband, Patrick, daughter Shannon, their rescue Lab-mix, Maddie, and their cat, Norma, in a nice ranch home near the Naples border with Marco Island. The only question in Jackie’s mind was whether TJ would blend well with their other pets.

So, Susan drove TJ down to their home for an audition. Again, TJ proved to be a non-confrontational guest and blended with the Mullen’s dog that very afternoon.  Their cautious cat, who fled to higher ground as a preventive measure, was reported coming back down to earth in a few days.  True to form, TJ, a certified “ladies man,” is now bonded with Jackie, who happily declared, “I think he’s mine.” That same day, Deborah said she was ready to let go of TJ, comforted by the knowledge that he had landed in a good place.

Based on a textbook example of teamwork from Deborah’s family, Hope staff and volunteers, TJ found his freedom in less than 48 hours from the time Deborah sent out her SOS . His forever home came in just 2 and a half short weeks. TJ owes his good fortune to the team effort, but first and foremost, to his beloved mistress, Deborah, who refused to rest until she found the help she needed for her faithful cuddle-bug.